And it’s featuring Kimberly Kincaid‘s artwork which she created back in 2013, inspired by Mark’s books! On her blog she wrote at the time :

“I should be working on something else right now. Shhh. Don’t tell on me, please. I HAD to take a break from “the commission” so I don’t go postal. I’ve read a few books recently that have me thinking about certain characters and how to visualize them. This is Jorg and yes, he is the bad boy of the bunch. He’s from the Broken Empire series by Mark Lawrence. It’s one of those dark fantasies that isn’t my usual fare (glad I stayed with it). But this character is so complex and offers such a challenge that I wanted to try. This is extremely rough…but I like what’s going on in his eyes. Yes, that is a scar on his face. I will keep playing with this at recess time. But for now, back on the clock.” 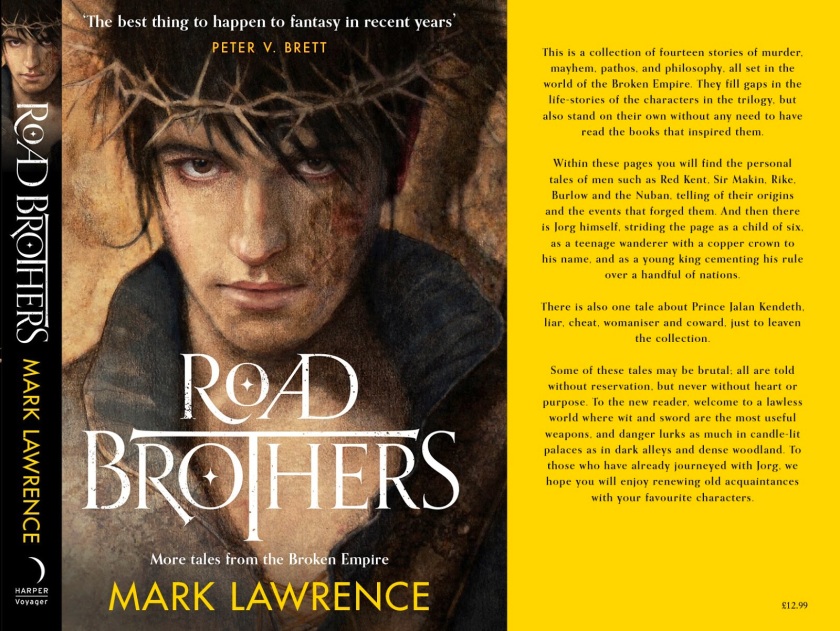 I think it’s a very nice sentiment from the publisher to use Kim’s artwork following her sudden and untimely death last year, who apart from being a wonderful person and an incredibly talented artist was also in some regards one of us: a reader and a big fan of Mark’s works. I very much wish she could be here with us now and see her art on the cover.

The new edition of Road Brothers will feature additional stories and  will be released on the 2nd of November 2017.

The original list of short stories available in the electronic version are as follows:

In addition there will be four new stories in the print edition: ‘No other Troy’, which originally appeared in the Broken Empire Omnibus published by Grim Oak Press, “The Weight of Command”, a story featuring brother Burlow and brother Sim, “Escape”, a story about the Nuban, and a Jalan short story titled ‘Three is the Charm”!

In the UK (& AUS + NZ) you’ll be able to get it in hardback published by Voyager. Pre-order here, or here for free worldwide delivery!

Update: it appears to be cheaper if you order is on the publisher’s website!