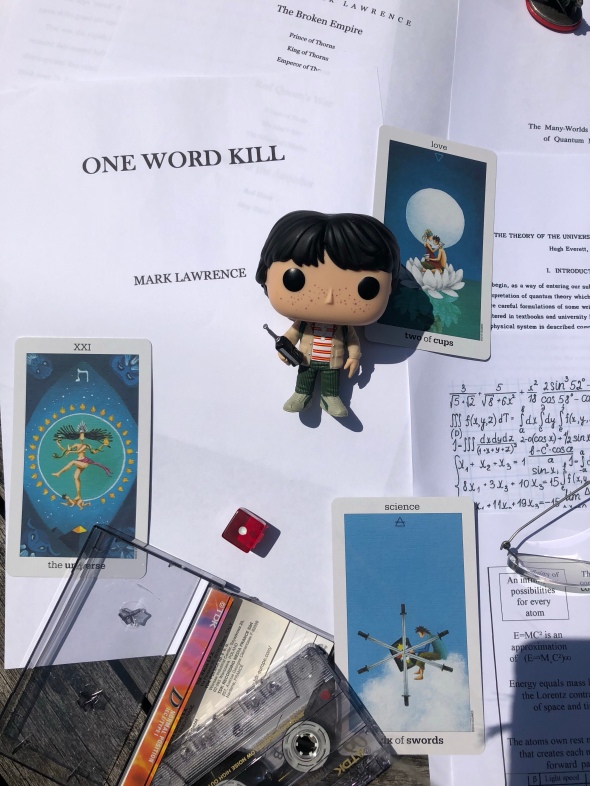 One word is all it takes to steal away your future.

Some words can even remove your past.

On the 9th of January 1986 Nick Hayes discovers he’s dying. And it isn’t even the strangest thing to happen to him that day. The teenage nerd and his Dungeons-and-Dragons-playing friends are used to exercising their imagination but none of them are ready for what follows.

First there’s the girl. Then a curiously familiar scientist who has powers that just shouldn’t exist. Then the puzzle that can’t be solved.

Nick finds himself embroiled in a bizarre decades-spanning love story in which he turns out to be a vital piece. He needs to unravel the mystery, save the girl, and hope she in turn saves him. All that stands in his way are a probably terminal disease, a knife-wielding maniac, and the laws of physics. Also there’s a party to go to where he has to dance.

One Word Kill is the first book in Mark Lawrence’s newest trilogy, Impossible Times. It was written in 2016, partly because Mark, being so prolific, was hoping to publish more than one book a year, but due to his current contracts he had to write in a different genre to make that happen. He was also (in his own words) shamelessly inspired by the 80s nostalgia of Stranger Things.

The book eventually found its way to Amazon’s publishing imprint, 47North and the brilliant people there loved it so much, they encouraged Mark to turn it into a trilogy. In hindsight, we can all be grateful to them they did. Because what happened, and it shouldn’t come as a surprise to Mark’s fans, he got straight back to his writing desk and turned a great book into a mind-blowing trilogy. And if this alone wasn’t cause for celebration, 47North and Mark’s editor, Jack Butler is planning to publish all three books next year!

One Word Kill is scheduled to come out early next year, shortly followed by the second installment, Limited Wish, and finally the third, Dispel Illusion. A link to pre-order the e-book version and the paperback can already be found on Amazon, with other formats and editions also added soon. You’ll find the link at the bottom of this page.

And to finish my post a few quotes from the book: 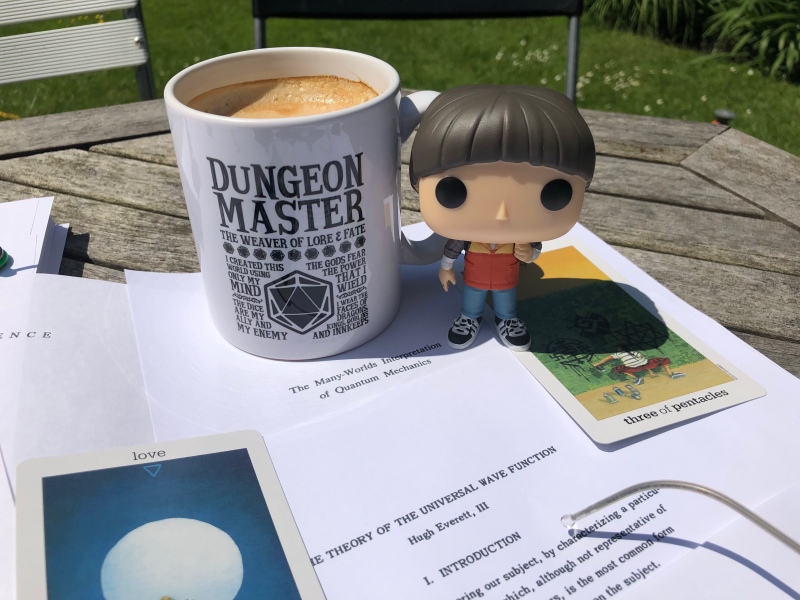 “I realised that just as the disease was starting to take me away from the world, I was for the first time, in a short and self-absorbed kind of life, starting to really see it for what it was. The beauty and the silliness, and how one piece fitted with the next, and how we all dance around each other in a kind of terror, too petrified of stepping on each other’s toes to understand that we are at least for a brief time getting to dance and should be enjoying the hell out of it.”

“And that’s what united the four weirdos who were about to settle around Simon’s gaming table and play out stories of magic and monsters. That’s the common thread running through all the diverse hordes of nerds and geeks turned up to the conventions and gatherings, queued outside Games Workshop for the latest rulebook. We were all of us consumed by our own imagination, victims of it, haunted by impossibles, set alight by our own visions, and by other people’s. We weren’t the flamboyant artsy creatives, the darlings who would walk the boards beneath the hot eye of the spotlight, or dance, or paint, or even write novels. We were a tribe who had always felt as if we were locked into a box that we couldn’t see. And when D&D came along, suddenly we saw both the box and the key.”

“She proved to be funny, shockingly rude on occasion, and the sneaky kind of clever that gets things done. I found myself stealing glances at her. She threw herself into the game in a way that I still couldn’t, without reservation. I wanted to be more like her. If I was going to die young I wanted to at least squeeze the juice out of life rather than pick at it. But you can’t change who you are. Not even with a gun to your head.”

And that’s all for now, folks! Good times ahead! 🙂

Pre-orders help authors and the publication of their upcoming books tremendously, please consider supporting Mark and the series by pre-ordering the book early on.

and on Amazon UK: One Word Kill